I have used filbert shells as pathways in my garden for many years. I think that I first saw filberts shells used as pathways in a display garden at the Northwest Flower & Garden Show in Seattle. It looked like a good idea and so I decided to try it and that was probably at least twenty years ago. I have had them ever since.

Filbert shells have a brown natural look, and a crunching sound when walked one and I like both the look and the sound. Like any natural product, they will gradually break down into the soil over time and so will need to be replenished. To keep them looking fresh, I replenish them once a year by adding a light layer of new shells over the existing ones.

While I do not know if there is any natural weed suppression in filbert shells, we rarely have weeds appear in our pathways and we used no weed barrier. There is also some belief that filbert shells tend to repel slugs and snails and this may be true on a limited basis. I think that if I were a slug or snail and I had a choice of crawling over filbert shells verses garden soil, I would probably pick the soil rather than the sometimes sharp edges of the shells. This does not mean that filbert shells prevents snail and slugs as I have seen snails crossing my pathways in the early morning, but the shells probably do act as a deterrent.

Each year when a new supply of shells arrives, we see an influx of blue jays and squirrels but this is only temporary as some of the shells still have meat of the nut in them. Soon the ‘meat’ is gone and so are the jays and squirrels. 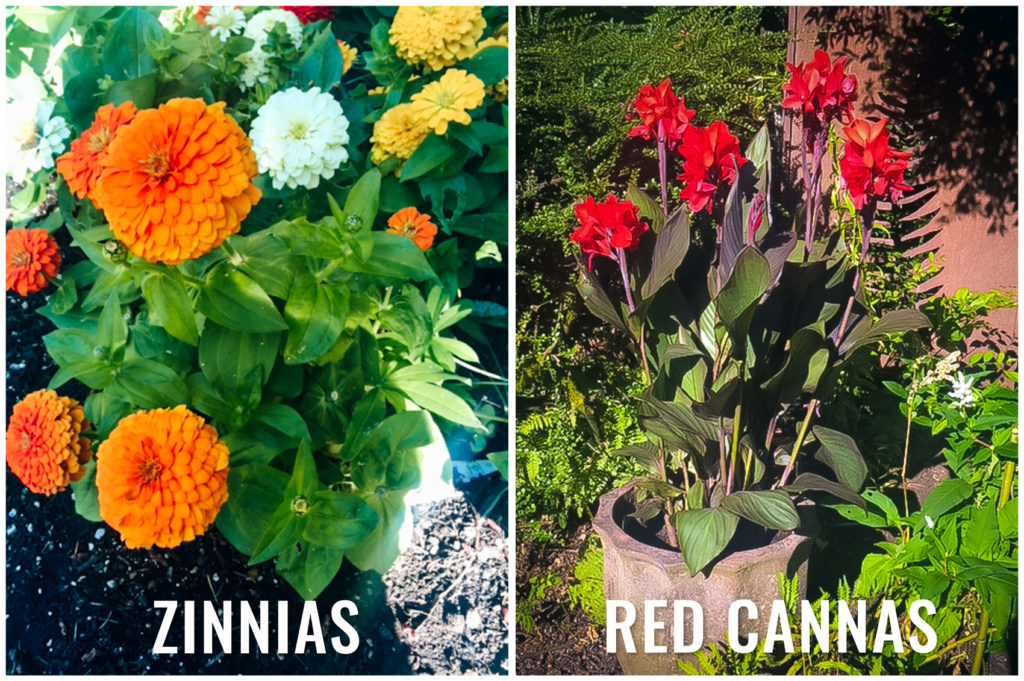 On a recent evening, as I strolled in my garden, I took notice of two ‘old fashioned’ garden plants that have held up very well with the recent heat. A grouping of Zinnias caught my eye as they were in full bloom with many flower buds yet to open. The Zinnias are in full sun and are showing off a range of colors from red, white, pink, yellow and orange. Zinnias are certainly not a new plant for gardeners and sometimes they can get overlooked, but for summer color in a sunny locations, they are ideal. They also make excellent cut flowers.

The other ‘old fashioned’ plant is the Canna. With their large leaves, Cannas can make a bold tropical statement in the garden. Most Cannas bloom all summer and into the fall and not only do the flowers have a broad diversity of colors, (red, pink, yellow & orange), the leaves do as well. Some leaves are solid green, others have stripes and some are red. Cannas make excellent container plants and as compared to zinnias which are a summer annual, Cannas are considered a perennial. They die to the ground after a frost and if the plants are in the ground and mulched well, they usually survive our winters. In a container, they should probably be brought into a garage or other protected place.

Don’t overlook some of the plants that are reliable summer bloomers and have been garden staples for many years. With the long range weather report, the key words continue to be water, water and water!