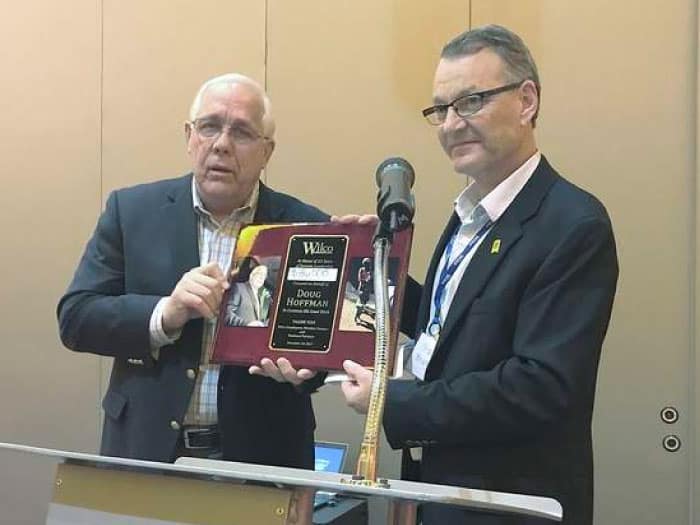 Members and employees of Wilco celebrated the retirement of CEO, Doug Hoffman on Thursday at the Salem Convention Center.

SALEM — Members and employees of Wilco gathered Thursday evening to celebrate the retirement of longtime president and CEO Doug Hoffman, who led the farmers’ cooperative based in Mt. Angel, Oregon for 23 years.

Hoffman, 65, will officially retire Dec. 31, but first the co-op sent him off with a party at the Salem Convention Center featuring hors d’oeuvres, speeches and a 13-minute video tribute.

Sam Bugarsky, president of retail farm stores for Wilco, also presented Hoffman with more than $91,000 in donations raised by the co-op, which will go toward charities supporting Hoffman’s missionary work overseas.

The money, Hoffman said, will go around the world to help those in need.

“That’s the aspect which I believe we need to our live our lives,” he told the crowd seated in the Willamette Ballroom.

Throughout the event, Hoffman was described by friends and employees as humble, generous and driven. Steve Keudell, former chairman of the Wilco board of directors, praised Hoffman for establishing a team-building culture at the co-op.

Bugarsky said it wasn’t always smooth sailing during Hoffman’s nearly quarter-century at Wilco. Over the years, he was faced with a number of difficult, often unpopular decisions that saw the co-op divest itself of several businesses, including the tire sales, grass seed cleaning and gas stations.

Hoffman made those decisions with the long-term future of Wilco in mind, Bugarsky said.

“We definitely wouldn’t be where we are today without Doug,” Bugarsky said.

Today, more than 3,000 agricultural producers from across the Willamette Valley are members of Wilco, and the co-op has grown during Hoffman’s tenure from 70 to 900 employees.

Hoffman and his wife, Jan, will continue to live in Keizer and serve on humanitarian missions overseas in Africa. His first trip is already scheduled for March 2018 in Kenya and Togo. He said he will also continue to support local organizations including FFA, Corban University and the Resource Education and Agricultural Leadership Program of Oregon.

“I’ve enjoyed my career here at Wilco, no doubt about that,” he said. “It’s because I enjoy working with farmers. You’re the salt of the earth. You’re the seed.”

Tim Ramsey, the former CEO of Oregon Cherry Growers, is poised to become the next president and CEO at Wilco, and will oversee the organization’s recent merger with Hazelnut Growers of Oregon

But Thursday was all about Hoffman, whom Bugarsky described as the hardest worker in the company and a man who was never satisfied with business as usual.

Bob May, a former board member, said Hoffman’s intention was always to do what’s best for Wilco.

“Thank you for your leadership and your friendship for the last 23 years,” May said.