It’s that time of year again. Picnics, barbeques, backyard gatherings…and yellow jackets. They can be aggressive and relentless. And even if you aren’t afraid of bees, it’s unpleasant to have a swarm around your dinner table.

Now, it’s important to know the difference between these yellow-striped miscreants and some of their not so distant relatives. While yellow jackets aren’t desirable in your backyard, other types of wasps are much nicer, and can even be very helpful. So, let’s talk about yellow “stripey” things. 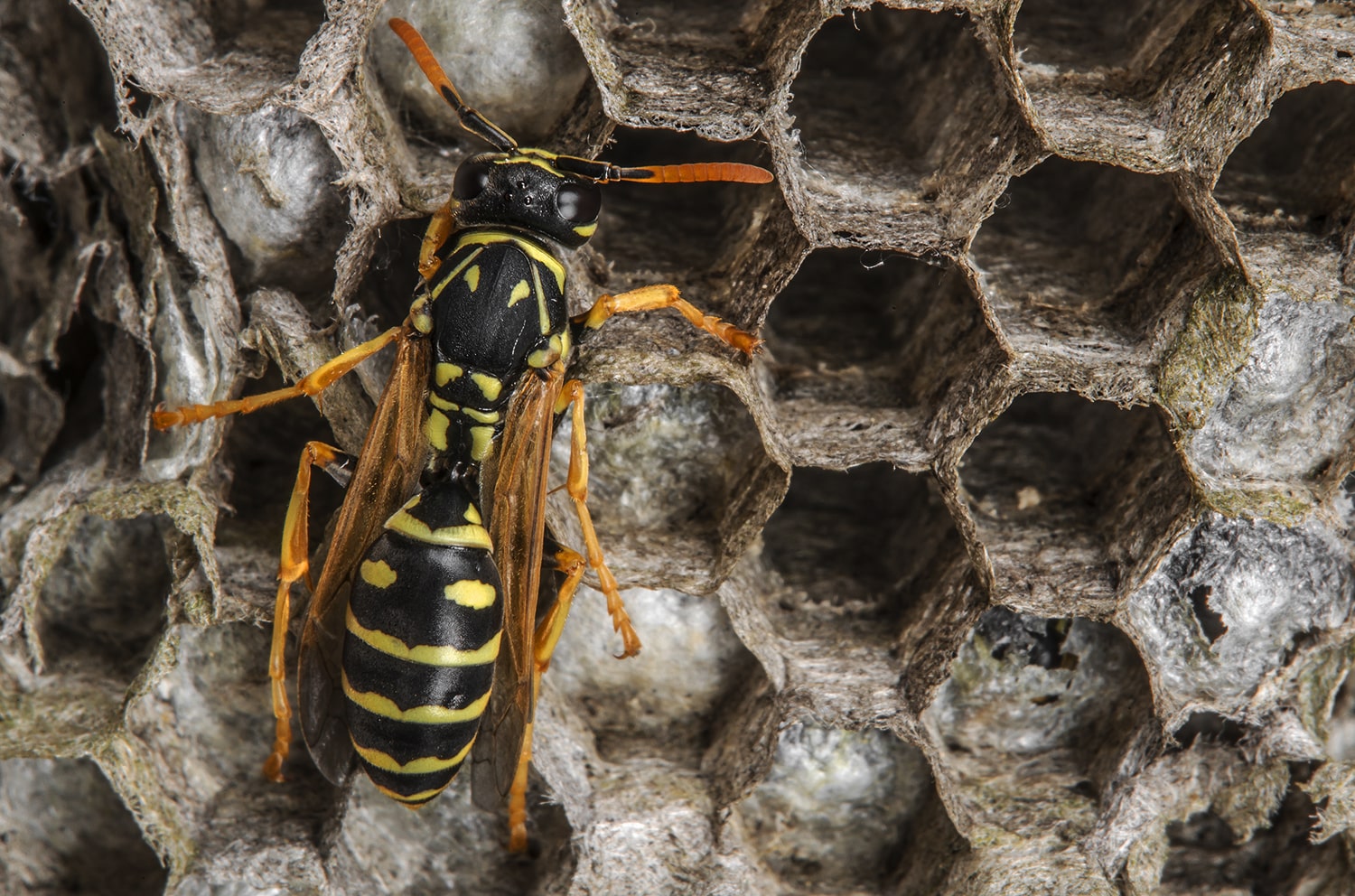 Paper wasps are a beneficial wasp. They are a pollinator and they feed on pests in your garden – including caterpillars. They are long- as far as wasps and hornets go, reaching about an inch from tip to tail. They have longer legs than yellow jackets. They create a nest hanging by a narrow stalk and made up of hexagon-shaped cells. They like to build their nests under the eaves of houses. They are able to sting but are not inclined to do so unless you are threatening them or their nest.

Mud daubers like to live alone and are really not interested in interacting with people at all. They rarely sting, and even then, it’s usually out of protection.
Like most other wasps, mud daubers are predators. Adults frequently drink nectar from flowers, but they feed their offspring with spiders. Mud daubers like to sting a spider to paralyze them and then take it back to their nest. As creepy as it sounds, they lay eggs on the spider and then seal it into a cell. The larvae then feed on the spider when they hatch. The main thing is that mud daubers eat spiders. That’s pretty beneficial- but maybe not to spiders.

The most common yellow jackets we have in our part of the country are the western yellow jacket, the common yellow jacket, and the German yellow jacket. They are bold and aggressive. They will use an alarm pheromone to alert the colony and mark any perceived threat so that they can attack it as a group. They only live in colonies and typically build their nests underground, in shrubs or in other places that offer protection.
Like the paper wasp, yellow jackets chew up wood fiber to make their “paper” nest. This is why you will sometimes see yellow jackets chewing on your deck. While the adults feed primarily on fruits, flower nectar, and tree sap, their larvae need protein and sugar. That is when yellow jackets are seen going after sweets, meats, and fish. While they do help with insect control, their overall nature makes them a wasp you may not want to keep around.

When you know what you are dealing with, it’s easier to tackle the problem. Not all wasps need to be killed or even controlled.

NOTE: Wear protective clothing, be cautious and move slowly when dealing with any kind of stinging insect.

The Mud Dauber is a great friend to have in your yard as they don’t like to sting, and they eat spiders. You probably won’t see them very often.

The Paper Wasp is a little trickier. If they don’t place their nest near you and your family, it’s best to leave them alone. They are pollinators and are non-aggressive. The only time to remove nests is when they are in constant contact with people or animals.

And then there are Yellow Jackets. Yes, they do a little bit of pollinating and they eat a few insects, but their aggressive nature makes them dangerous to keep around. I would recommend a two-fold approach:

1. If you can locate the nest, spray the opening of the nest with an insecticide like Spectracide Wasp and Hornet Killer. Stay as far away as possible and make sure to spray in early morning or late evening when yellow jackets are less active. Do this for at least three days in a row or until activity stops.

2. Put up yellow jacket traps like RESCUE Yellow Jacket Trap. An average yard should use four traps and make sure to hang them at least 20 feet from where people are gathering. The idea is to attract them away from you. If you want to add a “boost” to your trap, drop in a little meat. The yellow jackets will swarm to your trap. Make sure to empty the trap regularly.

Using a specific approach to control our insect neighbors is more effective and allows for the best success. When we lump all wasps together, we forget that very few of them are truly a threat to humans and animals. And we need all the help we can get to keep our yards growing strong.